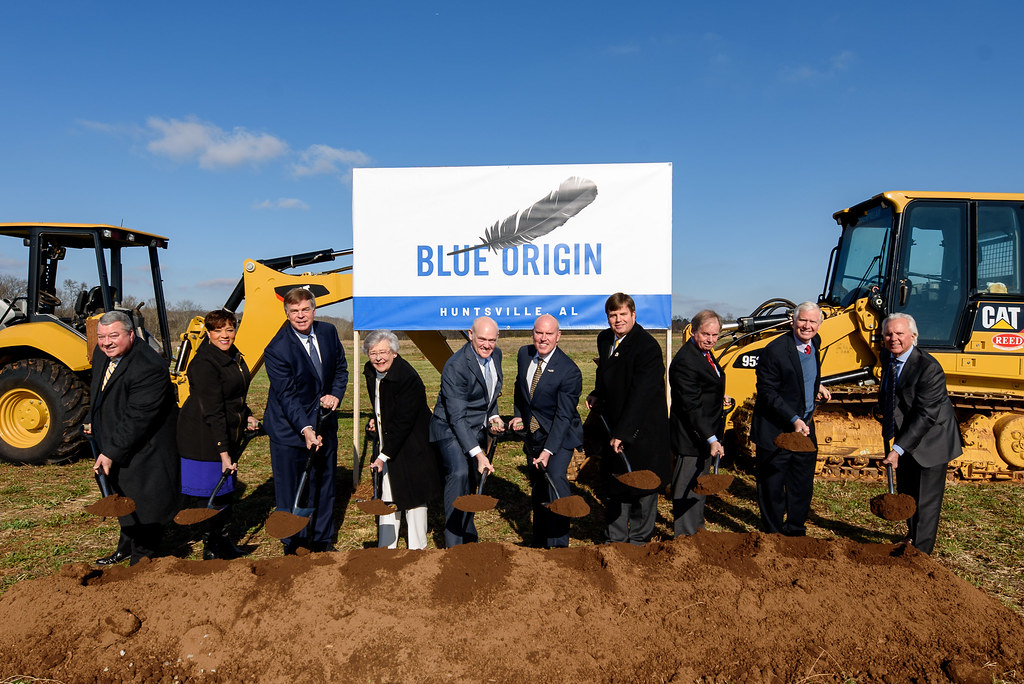 Scroll through the gallery above to see photos from Blue Origin’s groundbreaking event.

HUNTSVILLE, Ala. (January 25, 2019) – Blue Origin celebrated the official groundbreaking for its world-class rocket engine production facility on Friday in Huntsville.

The plant will be built on 46 acres at the corner of Explorer Boulevard and Pegasus Drive in Cummings Research Park. The project includes more than 300 new jobs.

“It’s a great day here in Rocket City,” said Bob Smith, CEO of Blue Origin. “Thanks to the votes of confidence from United Launch Alliance, from the Air Force for national security missions, and from Huntsville and the state of Alabama, we are breaking ground on a world-class facility to produce our engines and power the next generation of spaceflight.”

Blue Origin was selected by United Launch Alliance (ULA) in September of last year to supply its next-generation Blue Engine 4, or BE-4, for the first stage of ULA’s Vulcan Centaur Rocket.

The BE-4 is America’s next rocket engine and is made for both commercial and government missions. The production of this engine would end the nation’s dependence on Russia for access to space for critical national security space systems.

The Huntsville manufacturing plant is expected to open in 2020, and the first flight test of the new engine is expected in 2021.

Thanks to the votes of confidence from @ulalaunch, from @usairforce for national security missions, and from Huntsville and the state of Alabama – we are breaking ground on a world-class facility to produce our engines and power the next generation of spaceflight. #BE4 #BE3U pic.twitter.com/tIlaBqry2y

“Blue Origin is a welcome addition to Alabama’s roster of world-class aerospace firms, and its new rocket engine facility in Huntsville will expand the state’s already robust capabilities in space flight,” Governor Kay Ivey said. “Blue Origin is making a significant investment in Huntsville, and I’m certain the company will discover the many benefits of doing business in Sweet Home Alabama’s aerospace cluster.”

“Our workforce and our community are ready to deliver for Blue Origin, an innovative commercial space company that is changing what we think is possible in space,” said Huntsville Mayor Tommy Battle. “These BE-4 engines will power launch systems to put everything from satellites and products into orbit to space tourists and perhaps even space settlers into the final frontier. You truly can’t get to space and explore all of its untold promise without going through Huntsville first.”

Blue Origin’s engine production facility is the latest exciting addition to Huntsville’s Cummings Research Park, which is the second largest research park in the United States and fourth largest in the world.

“We are thrilled to officially welcome Blue Origin to Cummings Research Park,” said Erin Koshut, The Park’s Executive Director. “As we like to say, the research and development happening here is driven by science and powered by people. CRP has come a long way since it was established in 1962.  It is now 91 percent occupied and growing more by the day. We can’t wait to see construction take shape on the new Blue Origin facility and assist the company in recruiting talented people to join their Huntsville team.” Students from three area public school systems received a special invitation to attend Blue Origin’s groundbreaking in Huntsville to display projects they have been working on for the past year.

Engineering classes from Bob Jones High School in Madison, New Century Technology High School in Huntsville, and Sparkman High School in Madison County are participating in a collaborative project called DreamUp. Each class is creating a payload that will launch on a future Blue Origin New Shepard mission. The projects will be enclosed in small cubesats weighing less than 1.1 pounds; one will test if voltage is affected by microgravity using a Raspberry Pi, and another will test the electrical current created by heat transfer in space.

The students have been hard at work on their projects since Spring 2018, submitting monthly reports to the technical team at NanoRacks. Their work is being done in collaboration with DreamUp PBC, the leading provider of space-based educational opportunities, and NanoRacks, LLC, the world’s leading commercial space station company. This local DreamUp initiative is sponsored by the Huntsville/Madison County Chamber.