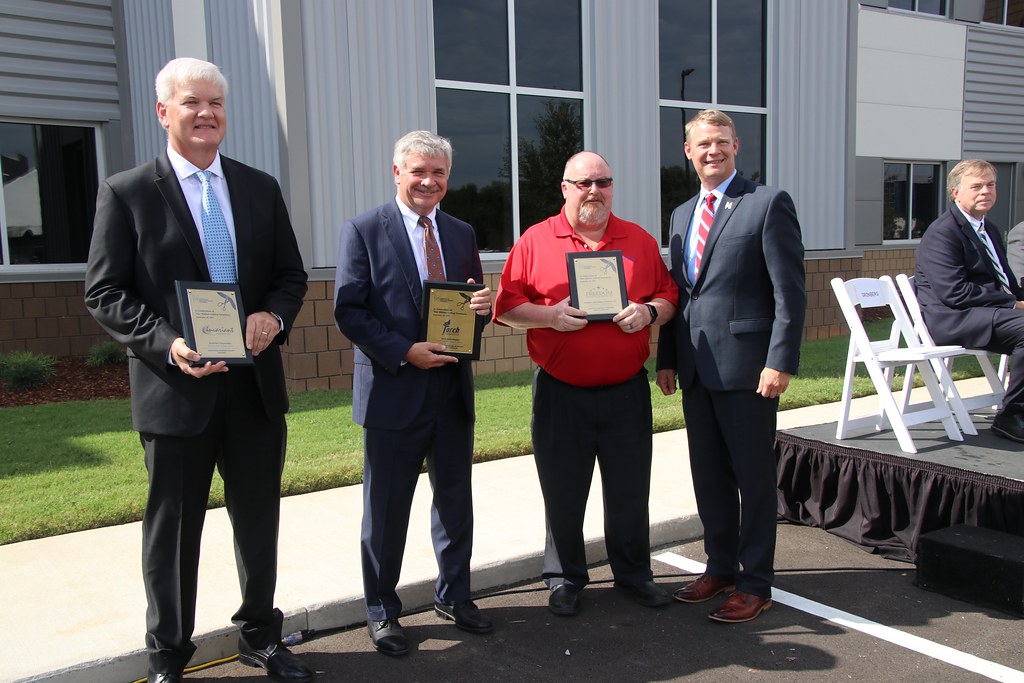 Freedom Real Estate & Capital (Freedom), Invariant Corporation (Invariant), and Torch Technologies (Torch) are celebrating the ribbon cutting of a new multi-use building located at 4040 Chris Drive. The ribbon cutting was hosted on September 30, 2021 at the site of the new building.

The event began with a welcome from Huntsville/Madison County Chamber Board Chair Jeff Gronberg. Next, we heard from property developer Freedom Real Estate & Capital CEO, Bill Roark, as well as from representatives of the tenants of the new facility, Invariant President David Anderson, and Torch Technologies President and CEO John Watson. The event concluded with remarks from Huntsville Mayor Tommy Battle and County Commission Chair Dale Strong.

Freedom, a real estate investment company, developed the new facility at 4040 Chris Drive, and leased the first two spaces to Invariant and Torch. The 4040 Chris Drive development is a multi-tenant building that will house up to 92,000 square feet once fully built-out and features a mix of office, research and development labs, light manufacturing, assembly, and integration space along with a high bay.

Invariant, an engineering, systems integration, and software development company founded in 2001 in Huntsville, is expanding into the new facility to support their company’s continued growth. “We are excited to grow and expand into this new facility that will provide our employees the resources needed to ensure quality services and products are delivered to our customers, and we are proud to be a part of Huntsville’s continuing success,” stated David Anderson, President of Invariant.

Torch, a 100% employee-owned services and solutions defense contractor, is adding a sixth location to their Huntsville headquarters with the occupation of this new space. “This marks the third major development project that Freedom has completed for Torch in South Huntsville in the last six years,” said Torch President and CEO John Watson.  “All three have been instrumental in the continued growth of Torch. The Freedom Center serves as the central gathering hub for our more than 850 Huntsville-based employee-owners and their customers; TIPC provides the specialized space needed for our electrical, mechanical, optical, and robotic prototyping efforts; and this facility will provide the much-needed space for limited production of Torch-developed hardware.”

Freedom Real Estate (Freedom) was founded on the basis of ethical fair play and the desire to provide the best results for our stakeholders. We are local market experts in the business of long-term ownership and management of commercial real estate. We are dedicated to building relationships in the community and with our clients. Freedom develops professional environments, showcasing and supporting our clients’ businesses. At Freedom we acknowledge that pro?t is important, but it’s not the bottom line. Freedom was established in 2014 to invest and manage commercial real estate. We developed an investment strategy around commercial rental income properties in the Huntsville, Alabama area, particularly southeast Huntsville. Our key focus was, and is, to own, hold and manage long term commercial real estate to return a reasonable pro?t. We concentrate our efforts on renovating and modernizing spaces to attract and retain premium tenants and partner with other investor ?rms to develop properties. We’re proud and grateful for the strong partnerships with key real estate property professionals in our region.

Founded in 2001, Invariant Corporation (Invariant) is an engineering, systems integration, and software development company proudly supporting the men and women in uniformed service, as well as the civil servants that support them. Invariant represents a commitment to the highest quality of achievement in service to their customers by providing a broad range of expertise and customer support. This includes cutting-edge custom software development, specialized missile interface and launcher capabilities, infrared (IR) modeling and simulation, real-time target track and sensor fusion, and laser testing expertise.  Invariant is moving its headquarters into the new South Huntsville multi-tenant facility and looks forward to expanding capabilities in prototype development and manufacturing with an overall increase in operating area by almost three times its current space. Invariant was named a Silver winner of the Best Places to Work in Huntsville award in 2019. The definition of Invariant is “never changing” as it relates to our constant commitment to excellence, and a commitment to those that serve our Nation.