Delegation from North Alabama visits with international partners in Japan 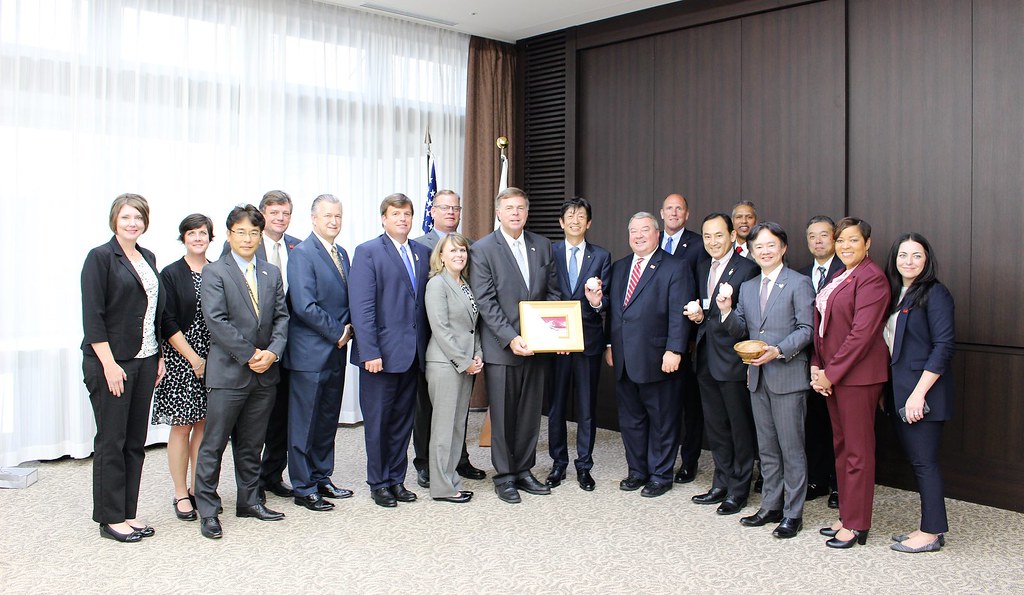 Photo gallery above – click through to see the various photos

(October 16, 2018) – A delegation from Huntsville/Madison County and the State of Alabama is visiting Japan this week to further strengthen our ties with our international partners.

Our team includes elected officials, Chamber leaders and company representatives of Toyota Motor Manufacturing Alabama. On Monday, the team visited Toyota City and met with members of the Executive Team for Toyota USA.

“We have been traveling to Japan for many years, and we are pleased to be able to meet again with our Toyota partners in their home country,” said Huntsville Mayor Tommy Battle. “This provides us with the opportunity to tour their plants and facilities and to visit with our new partners at Mazda.”

The group also toured the Toyota Motomachi Plant and Toyota Kaikan Museum, seeing some of the company’s newest automotive technologies and smart cars in person.

Tuesday, our delegation met with leaders of Mazda, our newest automotive partner. Soon, Mazda-Toyota Manufacturing U.S.A. (MTMUS) will begin construction on a large automotive plant in the Huntsville city limits of Limestone County.

“I can’t stress enough the importance of relationships in doing business with our overseas partners,” Mayor Battle added. “If we had not already established a long-standing collaborative relationship with Toyota, we would not have landed the new Mazda-Toyota plant. These commitments don’t just happen in 15-minute meetings or phone calls. There is a long process of communication, listening, and work toward mutual respect before we develop a trusted business relationship.”

“These meetings in Japan with the Mazda and Toyota corporations have created an even greater sense of understanding of the partnership and commitment that has been created with two of the world’s most renowned automakers, while engineering, road design and site prep continues on more than 2,000 acres locally,” said Madison County Commission Chairman Dale Strong. “It is truly exciting to be one of so many working together at so many levels to ensure the success of the largest economic development projects in the history of the state of Alabama. This project will be a redefining moment for North Alabama.”

“The MTMUS plant will bring thousands of jobs to our area,” added Chip Cherry, President and CEO of the Huntsville/Madison County Chamber. “We secured this new plant because of a trusted relationship we have built over many years with our Japanese partners. In fact, much of it goes back to Toyota’s engine plant locating in Huntsville nearly two decades ago and becoming a true community partner.”

Members of the North Alabama delegation will also meet with GE Aviation and NGS Advanced Fibers, their Japanese partner in developing the silicon carbide for ceramic matrix composites. NGS is located in Toyama, where the delegation will tour the sister facility to the one being built in Huntsville. These plants are the only two in the world to mass produce silicon carbide and ceramic matrix composite materials.

Later this week, the delegation will attend the annual meeting of the Southeast U.S./Japan Association in Tokyo. Our delegation includes the following people:

We are honored to present gifts to our Japanese partners.  On behalf of the City of Huntsville, State of Alabama and Huntsville/Madison County Chamber, we presented hand-crafted wooden bowls to both Toyota and Mazda executives. These were made from a maple ambrosia tree that grew at the site of the new Mazda-Toyota plant in Huntsville, and were created by Gerald Wocken, a Huntsville artist.  Madison Mayor Paul Finley presented signed baseballs from the recent groundbreaking ceremony for his city’s new minor league team.

Toyota presented us with a framed picture, and Mazda executives gave the group wooden rice spoons made in Hiroshima. Toyota executives read about our gift to them, a wooden bowl made from a tree that once grew at the site of the new Mazda-Toyota plant in Huntsville, Alabama. Huntsville Mayor Tommy Battle and Alabama Secretary of Commerce Greg Canfield hold the gift given to them by Toyota executives. Mazda executives present our group with wooden rice spoons made in Hiroshima. We also gave them a wooden bowl. A close up of the wooden bowls we presented, along with some pens we will use as additional gifts. These are all made from a maple ambrosia tree that grew at the site of the new Mazda-Toyota plant that will be built in Huntsville, Alabama.