HUNTSVILLE, Ala. (Sept. 27, 2017) — Governor Kay Ivey says it’s a new day in Alabama and our state, and the north Alabama region is poised for success.

Her remarks came this week during the 2017 Alabama Update, an event hosted by the Huntsville/Madison County Chamber at the Von Braun Center North Hall.

About 900 business and community leaders attended the luncheon to hear from Governor Ivey, who touched on many topics of interest to our area. She first addressed the GOP Senate Runoff that was decided the previous day.

“Republican voters in Alabama have chosen their nominee for the United States Senate,” said Gov. Ivey. “I certainly appreciate Luther Strange’s years of dedicated service to our great state and his commitment to Alabama. Congratulations are indeed due to Roy Moore on his win, and as the Republican, I will look forward to supporting him as he is the political party’s nominee.”

Moore faces Democratic nominee Doug Jones on December 12. Check to make sure your voter registration is current at alabamavotes.gov.

Governor Ivey has visited the Huntsville area several times since taking office earlier this year. One of the visits was to present a $10 million grant to the U.S. Space and Rocket Center to launch Cyber Camp. “That’s going to be a great asset for this area and to the state,” said Ivey. “This grant will allow for a campus expansion of all of the facilities at Space Camp and help make room for Cyber Camp facilities and increase the capacity for all the young people to come participate in that. By moving forward with this expansion, we’ll be expanding the opportunities for boys and girls to be prepared for the emerging cyber threats that threaten our homeland.”

Ivey’s other visits included Toyota’s recent expansion, the Blue Origin announcement in June, and a stop for her Listen, Learn, Help & Lead Tour in August. On that tour, she visited 11 different cities in Alabama.

“Here in Huntsville I heard all the good things that are going on as far as job recruitment and development and education. You have some really bright spots in this part of the state. But I also learned about some needs that you have with improved infrastructure, continued workforce development and more state support to attract more businesses. My team and I are already working on some projects and we’re going to address these concerns.”

Photos from the 2017 Alabama Update: 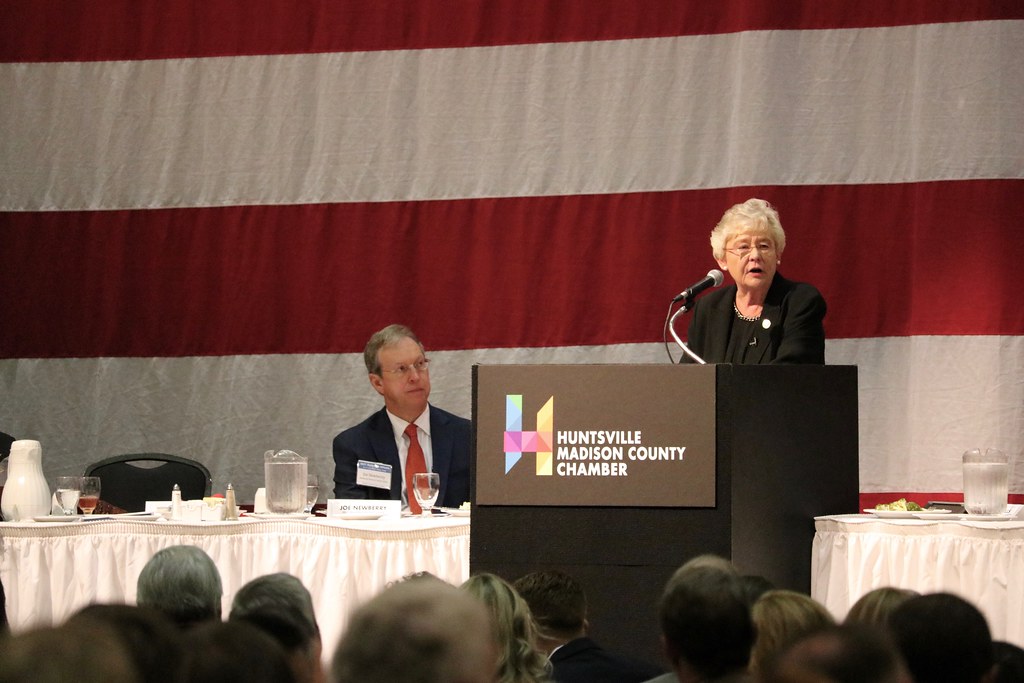 During her August 16 visit here, Ivey delivered a $1.3 million check for the relocation of Redstone Arsenal Gate 9.

“The Arsenal is absolutely essential to this area. Alabama has a long history of supporting our armed services in the United States, and I am thankful for the close relationship in this state, in this area, with the Army,” said Ivey. “Success of Redstone is so important to our state’s economy. We must do all we can to help Redstone achieve its mission of being the testing, development and doctrine center of the U.S. Army’s missile program. With all that’s going on in our world today, Redstone Arsenal is more important than ever to our nation.” “We’ve seen through the years, time and time again, politicians who say they want to help. It seems like every time we told them something, it fell on deaf ears – or it went in one ear and out the other,” said Ivey. “But friends, I’m proud to tell you it’s a new day in Alabama. We have new leadership at the helm that is totally committed to honesty and integrity in government. I am listening, I want you to succeed and I want to do everything I can to make you successful. I want you to achieve your dreams.”

Ivey complimented those in the crowd, using a buzzword we hear in Huntsville quite a bit: Innovate.

“Huntsville is the home of the Saturn V Rocket, and this city, as the titan of innovation, has tackled challenges in science, medicine, technology, transportation and modernization of the military just to name a few. Because of you, because of this city, and because of the ingenuity of our people here, a man walked on the moon. Our future is just as promising because Huntsville is part of the Space Launch System to safely send man to Mars and back.”

Gov. Ivey recently announced “Strong Start, Strong Finish” — which is a comprehensive approach to improve education all the way from Pre-K to the workforce.

“For too long, different aspects of our educational system have operated alone,” said Ivey. “Under Strong Start, Strong Finish, we will combine our efforts, work collaboratively and bring all stakeholders to the table. Strong Start, Strong Finish addresses three core phases of an individual’s learning journey: early childhood education, beginning high school, and post-high school. All three are focused on the goal of creating a well-trained workforce.”

Gov Ivey also strongly urged those in attendance to look ahead a few years to the 2020 Census, which has a direct, major impact on Alabama.

“I want to be frank with you about this. If we don’t have good participation in the census, we will be in danger of losing a Congressional seat. And this doesn’t just mean losing Alabama’s voice in Washington, this also means we are at serious risk of losing federal funding, federal funding that goes a long way in improving the quality of life for Alabamians, and helping us provide essential state government services,” said Ivey.

According to a study by George Washington University, every person counted in the census equates to the state receiving $1,567 in federal funds.

She encouraged people to take part in the census and encourage your friends and family to do so, too.

The Huntsville/Madison County Chamber presents several large “Update” luncheons featuring local, state and federal elected leadership. Mark your calendar for our next event, the 2017 State of the City Address with Mayor Tommy Battle on Thursday, Nov. 9. Reserve your seats today.